Aoto is a former member of the Heavens FC and is now a member of the Momoyama Predators. He has a rivalry with Kota because he managed to score three goals against him in the previous year.

In the first episode, Erika saw him attempting the crossbar challenge and again in episode 7. She also made a cake for Aoto's birthday. In a match,she also daydreamed about Aoto but was disturbed by Shou She was seen blushing in many scenes and it is assumed that she has a crush on him.

Right now he is living only with his mother. It is revealed that the reason he joined the Momoyama Predators for the Future Cup is because he really wants to meet his long-time-no-see father in Spain. One of his motives of playing soccer is so that he could become famous and his father would find him. His father's name is Jose Manuel Gonzales.He used to play in a soccer club in Spain but he already retired. When Tagi and the rest gave him the information about his father, Aoto said that he is not searching for his father because his father is gong to find him, not the other way around.

He has a cold personality (the only exception is towards his best friend, Tagi). While playing, he usually does not help when it's time to defend. After first meeting the triplets, he has a hard time distinguishing them one by one. As seen in Episode 26, he and Kota have a rivalry relationship until they both compete in a courage test. It's revealed that they are both very scared of ghosts. Aoto has a habit of fainting if he saw one and Kota would scream in fear.

He is also a fan of Diego Maradona, a professional football player of Argentina.

He has blonde hair and light blue eyes. Aoto is actually quite small for his age, but has amazing ball control and shooting ability. He often wears a gray hoodie, shorts, and blue shoes.

Aoto was first seen in episode 1, when he was practising. When Shou came to greet him, Aoto didn't remember him at all. Shou still asked Aoto to practise with him and Erika, but he declined.

He was later seen with Kageura Akira, before the beginning of the district tournament. They both said that they would be waiting for Predators in the city tournament.

In the first round of the city tournament, Heaven won Kiyose Kickers 6-2, when Aoto scored all his team goals by himself.

At the end of the episode 19, right when Heaven's match against Predators had began, he dribbled past seven Predators' players and scored a goal all by himself. When the match continues Aoto pretty quickly scores the 2nd goal, all by himself again. The Predators got into the game when Kota started to man-mark Aoto, because they are both forwards and because of that Kota can at least somehow predict Aoto's movements. That strategy worked out and the Predators tied the game. In some point of the gamem Aoto started passing to his teammates. That suprised the Predators at first, but Ouzou realized that Aoto had a weird habit before his pass and in the half time he told about it to his teammates.

Before the Future Cup

After the Heavens were beaten in the city tournament, Aoto quit the team.

As member of Momoyama Predators he taked part in Galaxia Cup's Japan qualification in order to meet his long lost father in Spain. 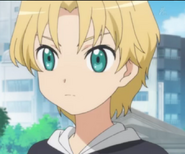 Add a photo to this gallery
Retrieved from "https://gingaekickoff.fandom.com/wiki/Aoto_Gonzales_Takuma?oldid=6494"
Community content is available under CC-BY-SA unless otherwise noted.